With 2019 rapidly hitting the rear view mirror, we take a moment to revisit some of the key moments of the past year on the forex market.

With another year’s trading coming to a close, this week we look back at some of the forex winners and losers in 2019. Read on for a brief reminder of some of the major events that the market lived through over the year, and hopefully take away a few ideas of what to look out for in early 2020.

The year started in earnest when the JPY surged early during the first Thursday of Asian trading, knocking the AUD, GBP and EUR sharply lower. Stock futures were also affected with the Dow dropping over 400 points. Markets at this time were highly charged with trade war worries and volatile moves down and up to end 2018.

The USD and AUD were hardest hit that morning, with the USDJPY losing 3.53% in 10 minutes, the AUDUSD dropping 3.39% and AUDJPY plunging 6.23% in five minutes! Buyers pulled most of the losses back during the trading day, but at the time it was a major shock and caused a fair bit of panic.

There have been a few theories around what may have caused the crash; Apple was one with the company releasing an earnings downgrade out of hours, that caused a drop in stock futures which led to a flight to safety in the yen. You have to remember the climate at the time — trade worries were in full swing, as was panic in the share markets. The US30 had just pulled back 7.23% after plunging as much as 16% during December.

Since the Apple report came out around an hour before the crash, many speculators believed that algorithms triggered the move with an error executing a mass surge of yen buying in extremely thin ex holiday markets.

Here we take a look at the USDJPY daily and AUDJPY 5 min charts to see just how amazing and shocking these moves were. 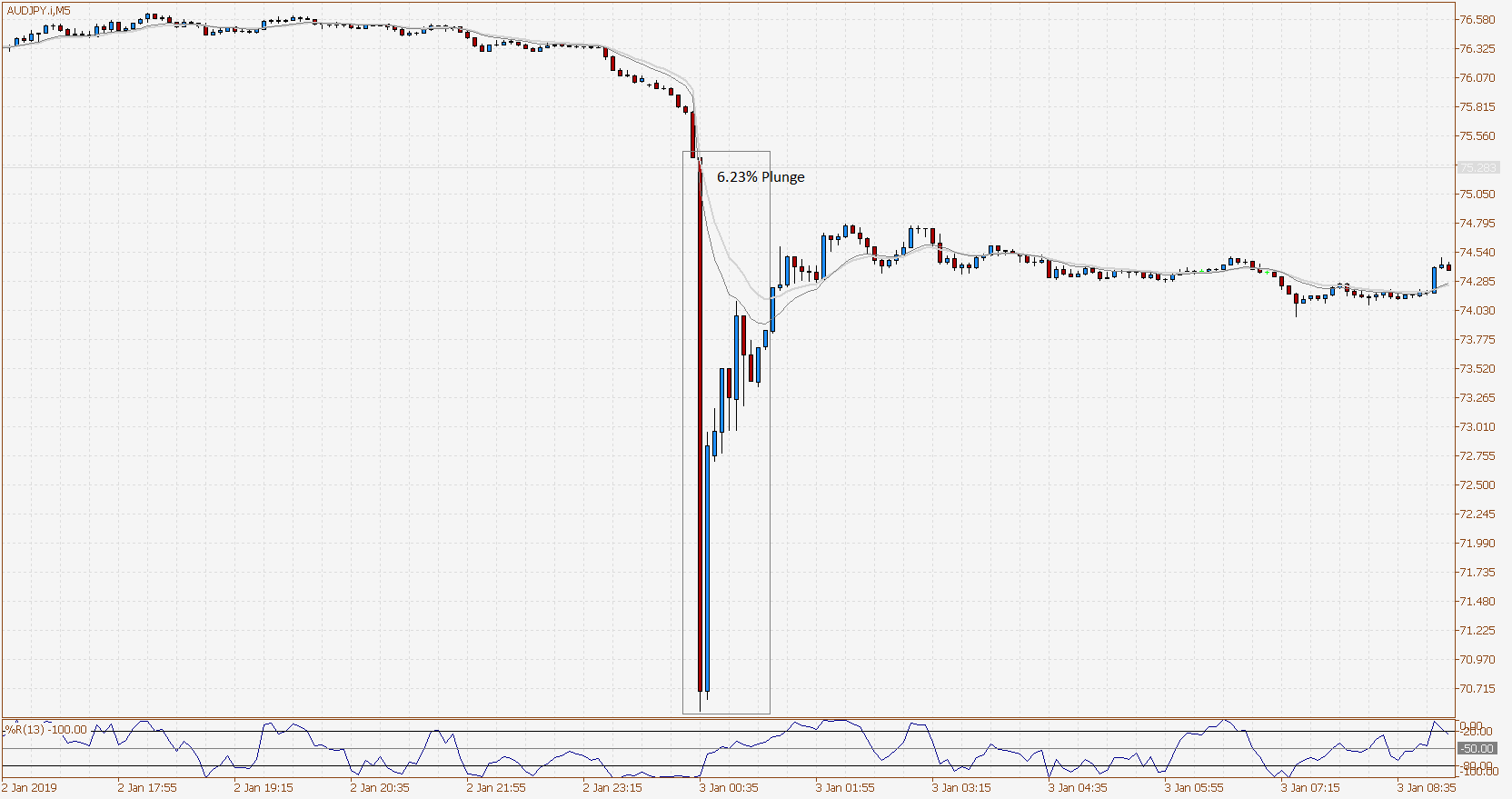 A GOOD YEAR FOR GOLD

After a strong close in 2018, Gold continued to pick up steam well into 2019 and we’re currently seeing a gain of 14.63% heading towards the end of the year. After a pullback in the second quarter, buyers jumped into overdrive taking price 18.40% higher between May and August, before hitting a slow decline which took just over 4% off those August highs. Gold certainly had an interesting year from a driver point of view, as we saw it used as a hedge against stocks at stages when traders were looking for a safe haven due to the current trade war. During this point, it often ignored USD strength, while at other times, we saw the normal relationship return with gains on a weaker USD. US interest rates have also played a pivotal role in demand during the year.

Overall looking at the year’s data, Gold really has to a degree run its own race for most of 2019. The USD index has returned 1.14% YTD, and the SPX has returned 27.30% YTD, so we can’t say that it has all been due to a weaker USD or weaker stocks based on those figures.

Looking at the Gold Daily YTD chart above, we would hope to see the support level hold which would continue to indicate there was buyer interest, but if we do see a break and close below that level, it could be a sign that sellers could be looking to start a new corrective phase.

GBP AND THE BREXIT QUANDARY

If two things dominated the landscape in 2019, it was Brexit and the trade war. The year started with the Asian Flash Crash shaving 5% off the value of GBPJPY in the first two trading days before buyers responded with a 12.30% rally peaking at 148.351 in March. Buyer momentum dried up in the second quarter as demand for the yen started to increase, before a strong bear market set in May to August as trade war fears started to gain pace.

On the Brexit front, it was an eventful year for the United Kingdom as she continued to struggle to secure a clear exit from the EU, with Parliament requesting two extensions before Teresa May was forced to depart her prime ministerial post in July. Boris Johnson took over the leadership but inherited the same Parliamentary deadlock and was forced to request a third extension from the EU. With moves to temper a harder Brexit stance in September, the GBP saw a sharp momentum reversal, with sellers coming close to retesting August lows before buyers took hold setting up a dramatic end to the year. With Parliament seemingly in deadlock, an early election was called and the Conservatives were once again swept into power, with Johnson delivering the biggest electoral win since Margaret Thatcher in 1987. The exit poll results the following morning set off a surge of buying that saw the GBP gain 2.47% against the JPY and 2.61% to the USD in the first 30 minutes of trade!

The GBP’s rally was one of 2019’s best, outperforming the AUD and EUR to the USD and JPY. The GBPJPY leads the gains from August, adding 16.98% to the December high. We can’t leave GBPUSD out as it gained just over 13% from September to its December high and set new highs for 2019, which the GBPJPY just fell short of by 0.65%. 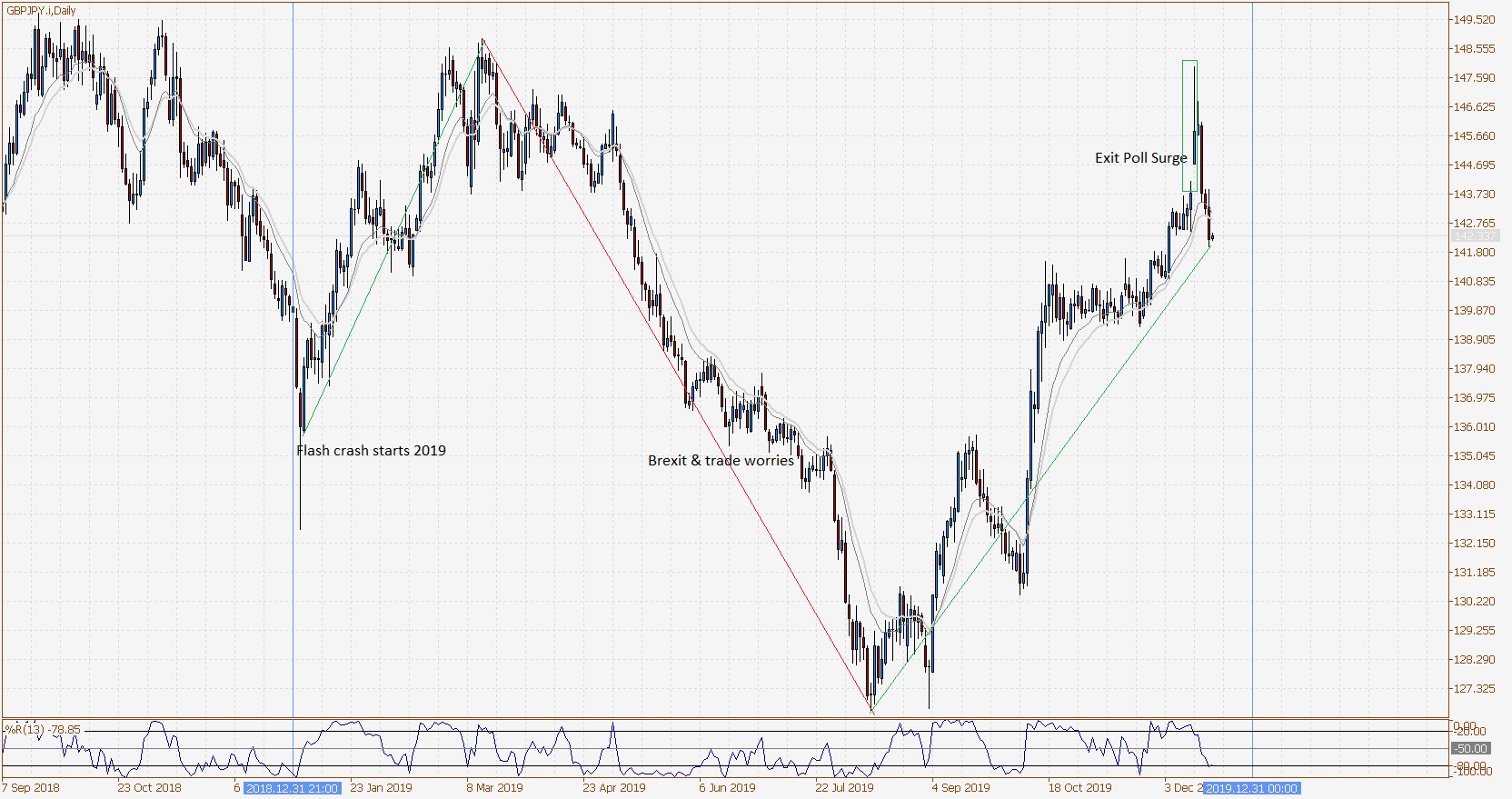 With UK Parliament finally voting for the EU Withdrawal Agreement Bill last Friday, we seem to have reached some sort of conclusion to the first phase of this long-running political crisis. Attention now turns to the January 31st deadline when the country officially leaves the EU. It’s been a bumpy ride for sterling over the past few years and with trade deals still to negotiate, there’s a long road of uncertainty ahead, which in its own way will offer up plenty of opportunities along the way.

Please look out for our second round-up of 2019 market activity next week, as we share some key insights into stock movements over the past twelve months. In the meantime, we hope you enjoy the upcoming holiday season in style.